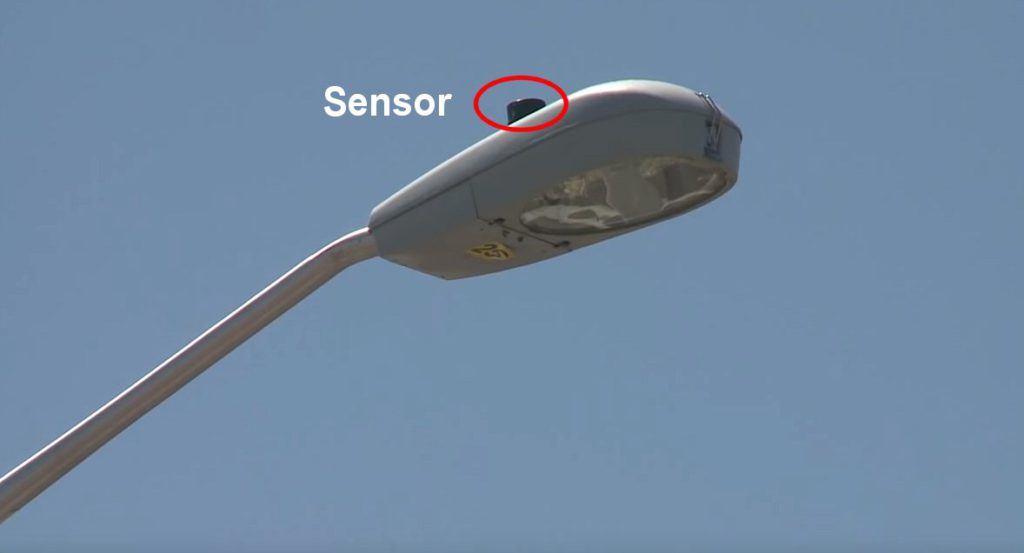 I have a street light in front of my house which I like most of the time. I live in a low crime area, but that doesn’t mean “no crime” and I think the light helps. For many years our light had a subtle orange glow that did not interfere with our projection show much at all. But recently our city changed out the light for new super bright LEDs that definitely had a negative effect on our projection show. Too much ambient light around the house can wash out the projection image and that became the case with my house. 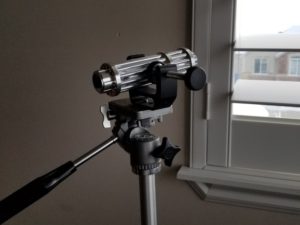 With a little research I discovered a trick often used by amatuer astronomers to temporarily turn off a street light. Most street lights have a light sensor mounted on top. It’s a cylindrical box that can easily be seen in the daylight if you look for it. The purpose of the sensor is to automatically turn the light off during the day and turn it on again at night. You can use a laser pointer to trick the sensor into thinking it is day when it is actually night simply by focusing the beam on the sensor. The street light turns off.

The beauty of this method is that it does not harm the street light in any way and the effect is temporary. The street light is still functioning as designed. You are just taking advantage of the design for your own purposes.

Use A Bright Red Laser

You will definitely need a brighter laser pointer to accomplish this trick. The cheap ones in the check out aisle at WalMart will not work. No need to get too crazy, but something close to 1 watt will work great. I found my laser on eBay.

Any color will work if the laser is bright enough, but red seems to work best. Street light sensors seem to be particularly sensitive to red light. Another advantage of using red is that it is visually more subtle and it is difficult to see the beam unless there is smoke or fog in the atmosphere. The bright green ones, on the other hand, have a beam that is easily visible in most conditions and that might distract from your projection show.

Another consideration is battery life. A laser with a rechargeable battery will save you a lot of money. Charge the battery during the day and then use it in your laser at night.

Mounting And Positioning The Laser

Since the street light will only stay off as long as the laser is shining on the sensor, it is essential to mount the laser in a way that will keep it focused for as long as you need. I used an Inexpensive camera tripod

along with a specialty clamp

to hold the laser in place. If you’ve used a laser pointer before, you can appreciate how difficult it is to maintain the focus on a single point for any significant length of time. The tripod makes it easy to aim the laser and lock it into place.

You can position your laser anywhere that has a good view of the street light and the sensor. A fenced backyard might be a good spot that will keep the laser secure while you use it but still give you easy access. I position my laser inside my house. I shoot it through a window that has a clear view of the street light, but that won’t interfere significantly with the projection. If you want to use a window that will feature prominently in your projection show, you could cover the inside of the window with white poster board and leave a small hole for the laser beam to pass through.

Once you get the laser positioned and focused on the sensor, it may take a while for the light to shut off. Mine shuts off in just a few seconds, but I have seen where others can take up to a minute before the light goes off. You may need to be patient.

There are no laws against owning a laser of any kind. If you ever hear of an “illegal laser” it has to do with how the manufacturer classifies it rather than whether it is OK for you to own it. Even if you were to purchase an illegally classified laser, only the manufacturer could be in trouble, not you.

As far as the legality of turning off a street light is concerned, laws vary from city to city. It is doubtful that any city has a specific ordinance against using a laser on a street light. Other more general laws could apply, but they will be subject to interpretation. Here are some things to consider:

Of course, you will want to be considerate of your neighbors’ wishes. But if they are supportive of your display, they will probably not care about the street light being off for a short time. In fact, they will likely be so dazzled by your projection show, they won’t even notice the street light is not on!

Lastly, I would urge you to just use common sense. If you live in a higher crime area that depends heavily on street lights to prevent crime, you may not want to even do a projection show, let alone use this laser method.

to be notified of new projection videos and other updates.