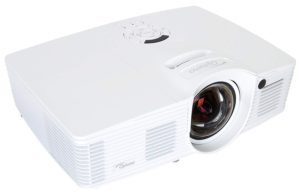 Figuring out what kind of projector to get for this kind of project can be a little intimidating. In this article, we try to break it down to it’s simplest form so that you know what to look for. You need to pay attention to 3 main things: throw ratio, resolution, and brightness.

Throw ratio is simply how big the projected image will be based on how far away your projector is from your house. Most projectors have about a 1.5:1 throw ratio which means for every 1.5 feet of distance the image will be about 1 foot wide.

Let’s say you plan on putting your projector on the sidewalk in front of your house and your sidewalk is 30 feet away. At that distance, a standard throw projector will produce an image about 20 feet wide. Unless you have a very small house, that is probably not big enough. You will need a lot more distance to get an image large enough to cover your whole house. If you have a large property or your neighbors across the street don’t mind you projecting from there, it is possible that you could get enough distance to make it work.

Short throw projectors tend to be more expensive because it costs more to make the lenses. As you might expect, they are also a bit harder to find. Unfortunately, the exact throw ratio is often left out of the projector specifications which can be confusing. However, the term “short throw” is an important feature, so it will definitely be mentioned if the projector has it. On the other hand, if the description of the projector does not mention “short throw”, then it almost certainly is standard throw because that is most common.

You may also see “ultra short throw” projectors. They will produce an even larger image with less distance (.25:1 throw ratio), but for projection mapping, that can be bad. You will be forced to put the projector so close to the house that it will produce strange shadows since a house is not flat like a screen. They are also difficult to protect in a box since they use a mirror on the top rather than a lens in the front.

The resolution of the projector determines how sharp the projected image will be. Since we are blowing up the image big enough to cover a house, it makes quite a bit of difference in the final look. A projected image is made up of thousands of tiny little squares or pixels. The more squares there are, the sharper the image. Naturally, you will want the most pixels you can possibly get, but the more squares, the greater the expense.

It isn’t always easy to tell exactly what the resolution of a projector is. Some manufacturers will call their product an HD projector, but they are referring to the resolution of the video input rather than the output. That is misleading because almost any projector can accept HD video input, but it has nothing to do with the quality of the image the projector produces.

There are also three types of HDTV resolutions you will see:

For an average sized house you will want at least XGA (1024 x 768) resolution or better. My first house projections were done with an XGA projector and it worked well, but the image wasn’t super sharp. SVGA (800 x 600) resolution would only work on very small houses. 1920 x 1080 is the default resolution at which we provide the videos. I currently use a 1920 x 1080 projector on my house. 4k projectors are awesome and gradually becoming more affordable, but it is difficult to find short throw models. Hopefully we will see some available in the next few years. 4k resolution videos are available from us on special request.

A bright projector will make the difference between a murky, dark image, and a crisp clear one. If your home has a lot of ambient light from street lamps or other lights, then you will definitely need a bright projector to overcome that.

Brightness is measured in “lumens”. One lumen is approximately equal to the amount of light a lit candle will produce. A standardized procedure for testing projectors for brightness has been established by the American National Standards Institute (ANSI). The best measurement of brightness for a projector will always be ANSI lumens, so that is something to look for. Some projectors claim to be brighter than they really are because they are using a different method for measuring brightness.

We recommend that your projector produces about 2,500 ANSI lumens or even better, if possible. You might be able to get by on 1,500 lumens if the area around your house is very dark, but we wouldn’t recommend going any lower than that.

Cheap LED projectors have flooded the market in recent years. The pricing looks fantastic, but beware! You usually get what you pay for! If you are on a limited budget, it is better to buy a used, high quality projector, than a cheap new one.

LED or Light-Emitting Diode technology is all the rage right now. It is a new, more energy efficient way of producing light than traditional light bulbs.

We highly recommend that you go with a projector that has a traditional Halogen bulb rather than LED. Projectors need to produce a lot of light and Halogen is just much brighter for the money. LED technology is rapidly improving, but it will be a long time before LED projectors with enough ANSI lumens to match Halogen will be available for a reasonable price.

Many people say that LED projectors have the “appearance” of being three times brighter when compared to a Halogen projector because they have a more bluish light. In fact, a new measurement for “LED lumens” has been established in an attempt to account for this apparent difference. In my opinion, it is hogwash. A lumen is a lumen no matter what source the light comes from. “LED lumens” are just a marketing ploy to confuse consumers and convince them that LED projectors are brighter than they really are.

to be notified of new projection videos and other updates.